2019
Great content knows no bounds
2018
Being Candid
Are we who we were?
2016
The value of different perspectives
2015
I slaughtered a lamb for you
A Personal Branding Case Study
2014
From Funerals to Florida to Saudi Arabia and the Indigo Girls — Marketing 101
TELLING STORIES BLOG |
September 9, 2018

How politicians understand their audiences better than you think

— unless they’re being taped

Many years ago, I worked in politics.  I interned in the U.S. Senate, was a legislative aide in the Wisconsin State Legislature, ran a congressional campaign, and served as the Chief of Staff to the Wisconsin Attorney General.  I loved what I did.

But I ultimately walked away from a very promising career doing what I loved because I saw so much dishonesty from the people in it.

What they claimed to stand for often had little or no bearing on how they functioned.  After the rush of being elected for the first time, they almost always yielded to the culture of the industry and became primarily motivated to remain in office and climb the career ladder.

They soon learned who was truly important to their career ambitions.  I’ll give you a hint, it’s not voters.

Recently, we saw the Lt. Governor of Georgia lose badly in a Republican primary contest to an opponent who distinguished himself by pointing a shotgun at a young male actor in his commercials and sitting in a pickup truck that he boasted was big enough to round up “illegals.” 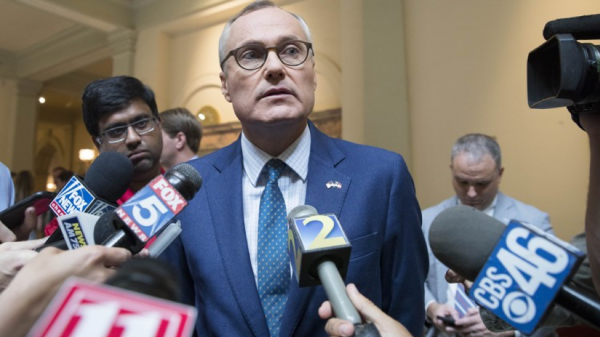 Shotguns and pickups may have contributed to his defeat.  But what kneecapped Casey Cagle was his candor with someone he believed was one of his key audiences — a colleague.  In a lengthy conversation secretly taped by another primary competitor, Cagle acknowledged that he helped push legislation through the Georgia Legislature that would raise the cap on tax credits for private school scholarships.  He did so, he told his colleague, because he wanted to ensure that another primary opponent would not receive more than $1M from a super PAC that supported it.  “Is it bad public policy?” he said to his colleague, “Between you and me, it is. I can tell you how it is a thousand different ways.”

He got caught being candid to the wrong audience.  He thought it was just between you and me.  Unfortunately for him, his colleague had other plans.

Unsuspecting political candor isn’t confined to the Peach State.  Recently, California Republican Congressman Devin Nunes was caught on tape speaking to big money donors in western Washington about impeaching Deputy Attorney General Ron Rosenstein.  Responding to a potential donor’s question about where the impeachment effort stands, Nunes was extremely candid to an audience he thought he could trust — Republican donors. 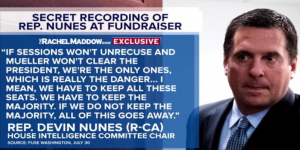 It would have to wait until after the midterm elections, he confided.  The Senate first had to focus on getting Brett Kavanaugh confirmed to the U.S. Supreme Court.  Once that was accomplished, their efforts could refocus on Rosenstein’s impeachment.  That’s why the midterms are so important, he told the crowd (with one infidel in the audience taping him).  The Republicans needed to hold onto their majority in the House, he implored them.  If they don’t, there would be no one left to protect the President.

Both Cagle and Nunes were unaware that they were being taped.  They got caught being candid to two of the most important audiences that truly matter to them, colleagues and contributors.  Throw in polls and you have the political audience trifecta.  Their candor is both refreshing and frightening.  Refreshing because they moved away from their canned, staff-scripted commentary and spoke candidly about what politics is really all about.  Frightening because, as I experienced it many years ago, they offered insight into what politics is really all about — their careers.

The audiences that matter get candor.  Voters get screenplays.

As a communications executive, I applaud their clear understanding of which audiences are most important to them, unless they’re caught on tape.  As a rehabilitated politico and a voter, it’s a disheartening dose of reality.